The ICAR-National Research Centre for Grapes under Indian Council of Agricultural Research (ICAR), New Delhi was established on 18th January 1997 at Manjri, Pune.The mandate of the institute is:

Brief history of the Centre

The grape growers of India were among the first to form a cohesive non-political, non-racial and non-religious group for sharing the knowledge and for garnering technical and administrative support for the grape industry in all facets of grape production, processing and marketing. Owing to several problems faced by grape growers with respect to grape production and to get their problems solved, the group approached the Indian Council of Agricultural Research to establish a dedicated research unit for working on grapes. Thus after due deliberation on the research needs of grape growers and the grape industry and also to address the future challenges and opportunities, the Indian Council of Agricultural Research approved the establishment of National Research Centre for Grapes vide sanction letter No.1 (2)/92-PI&M (Part-III) dated 16 September, 1993.

Selecting the location of the Centre

After due consideration of the soil profile characteristics, climatic factors, proximity to other research and development institutes and nearness to commercial vineyards, of the land offered by the states of Maharashtra, Karnataka and Andhra Pradesh; the ICAR selected the land offered by the Government of Maharashtra at Manjri on Pune-Solapur Road for establishment of the Centre.

The official decision to hand over the land by the Vice-Chancellor; MPKV to DG, ICAR was announced on 18th January 1997. However, it was later realized that the selected piece of land belonged to the Maharashtra State forest department even though there was no forest cover. Mahatma Phule Krishi Vidyapeeth (MPKV), Rahuri, facilitated the lease by handing over an equal area of land near Nagpur to the Forest department for which, the ICAR bore the cost of afforestation. The ICAR and NRC for Grapes will be always indebted to the grape growers, State Department of Agriculture and MPKV, Rahuri for their help for its initial establishment. The actual land measuring 46.78 ha was leased to ICAR-NRC Grapes on 29th January, 1998. To commemorate its birth, ICAR-NRC Grapes, Pune celebrates 18th of January as its “Foundation Day”. 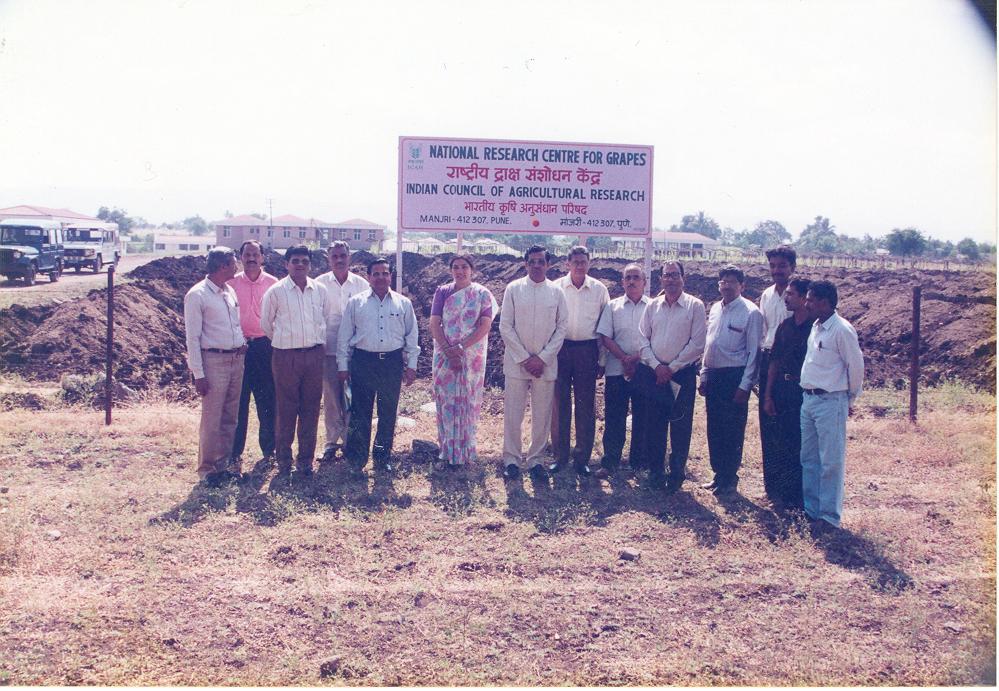 The Centre initially started functioning from the newly constructed R & D premises of the Maharashtra State Grape Growers’ Association (MSGGA) which is adjoining to the site selected and also utilized the newly established vineyards of MSGGA for carrying out small scale research experiments.

Dr. S.D. Shikhamany, Principal Scientist, Division of Fruit Crops, I.I.H.R., Bangalore, was appointed as the Officer on Special Duty on 22nd Oct, 1996. During December 1996, the first batch of scientific staff was posted to the Centre.

In May 1997, the first Staff Research Council meeting was conducted under the Chairmanship of Dr. S. P. Ghosh, DDG (Hort.), ICAR and short-term Research Projects were formulated to tackle some of the then major problems faced by the grape industry. A group discussion was arranged with representatives of Maharashtra State Grape Growers Association; officials of State Horticulture Department; Scientists of MPKV, Rahuri and Agharkar Research Institute, Pune; to identify and prioritize the research needs of the grape industry.

Important milestones in the Centre’s growth